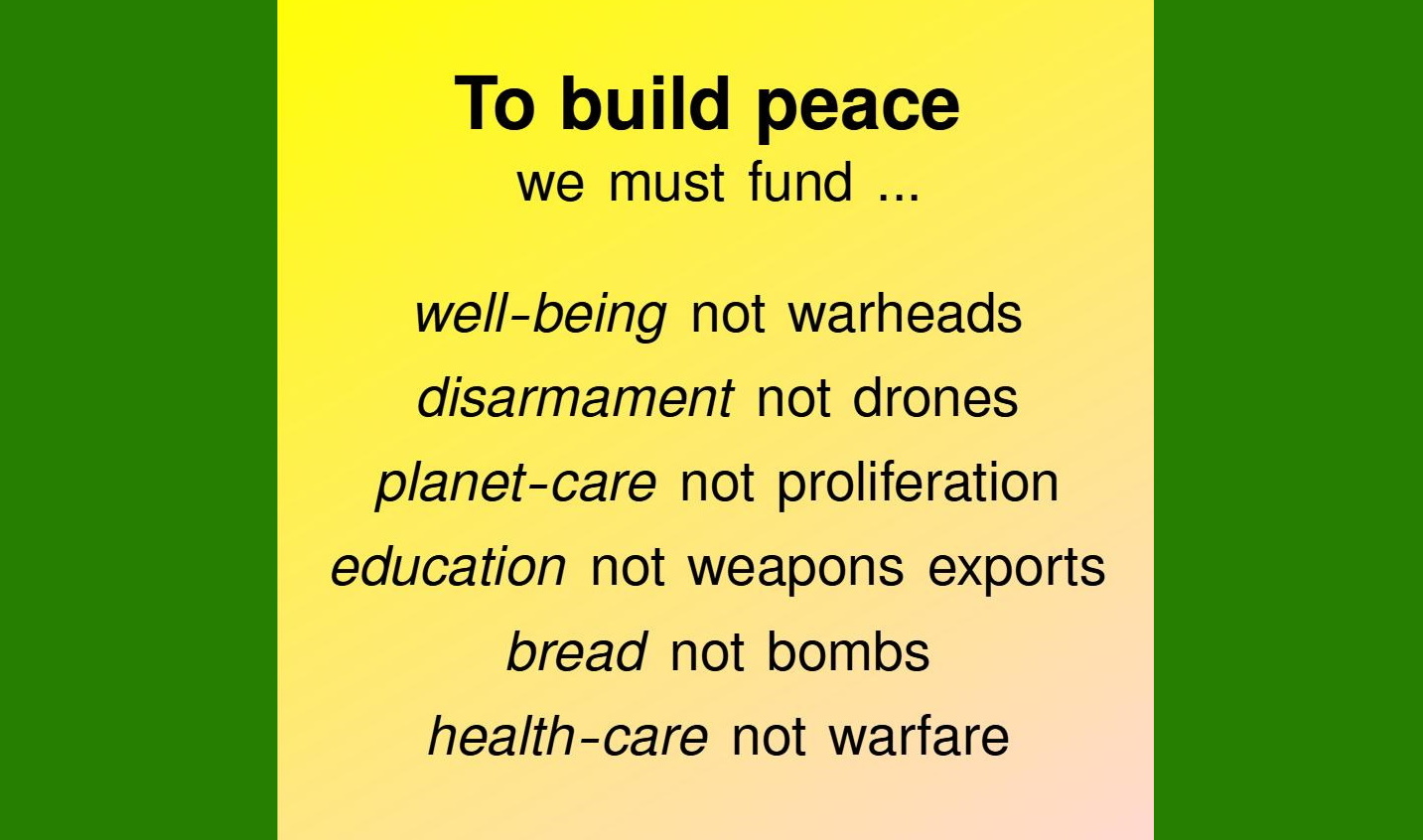 A wide range ofUK campaigning organisations, including NFPB, are urging the government to rethink its military spending decisions in the light of the pandemic and the climate emergency.

The call follows the publication of the government’s Global Britain in a Competitive Age: Integrated Review of Security, Defence, Development and Foreign Policy, (March 16), and the related Defence Command Paper, Defence in a Competitive Age (22 March).

GCOMS-UK rejects many of the key conclusions of the UK’s Integrated Review – notably that increased nuclear weapons capacity and increased funding for the armed forces will make British citizens safer. While the government itself says that climate change is its “number one international priority”, this is not reflected in recent spending decisions.

The campaigners oppose the dramatic increase in military spending (announced last November), amounting to £24 billion on top of existing budget levels. This represents an average £6bn increase per annum over the four years 2021-25 – the largest percentage increase in 70 years. The core military budget in 2020-21 was £41.2bn, though the amounts reported to NATO are higher still.

All this while the government is making drastic cuts to the overseas aid budget, and offering 1% pay increase to the nurses. While the ‘ten point plan for a green industrial revolution’ has a budget of £12bn, a maximum of only £11bn is earmarked for spending in the next four years. Averaging just £2.8bn per year, this represents less than half the additional military allocation and is far less than the amounts advised by the Committee on Climate Change.

GCOMS-UK Coordinator Matt Fawcett writes: “These are totally misplaced priorities. The pandemic and the climate crisis have shown us in dramatic ways that the areas we need to invest in are not high-tech military gadgetry. Rather than indulge in provocative gestures, the UK should work to establish greater international cooperation over health, environment and common security. Otherwise, all sides will continue up the military spiral, with grave risks of devastating confrontations. Recent events around Ukraine and Taiwan confirm the dangers of a military-led strategy.”

Stuart Parkinson, Executive Director of Scientists for Global Responsibility, added: “Boris Johnson says he wants to make the UK a ‘science and technology superpower’ but his main plan for achieving this is to greatly expand the use of robots, artificial intelligence, and lasers in military confrontations. Coupled with an expansion of nuclear weapons, this is an extraordinarily dangerous path. Yet the COVID-19 pandemic and the climate crisis show where scientific and engineering effort is really needed – to help tackle the considerable health, social and environmental problems that the UK and the world face.”

ACTION:
Use this letter-writing tool to contact your MP about these issues