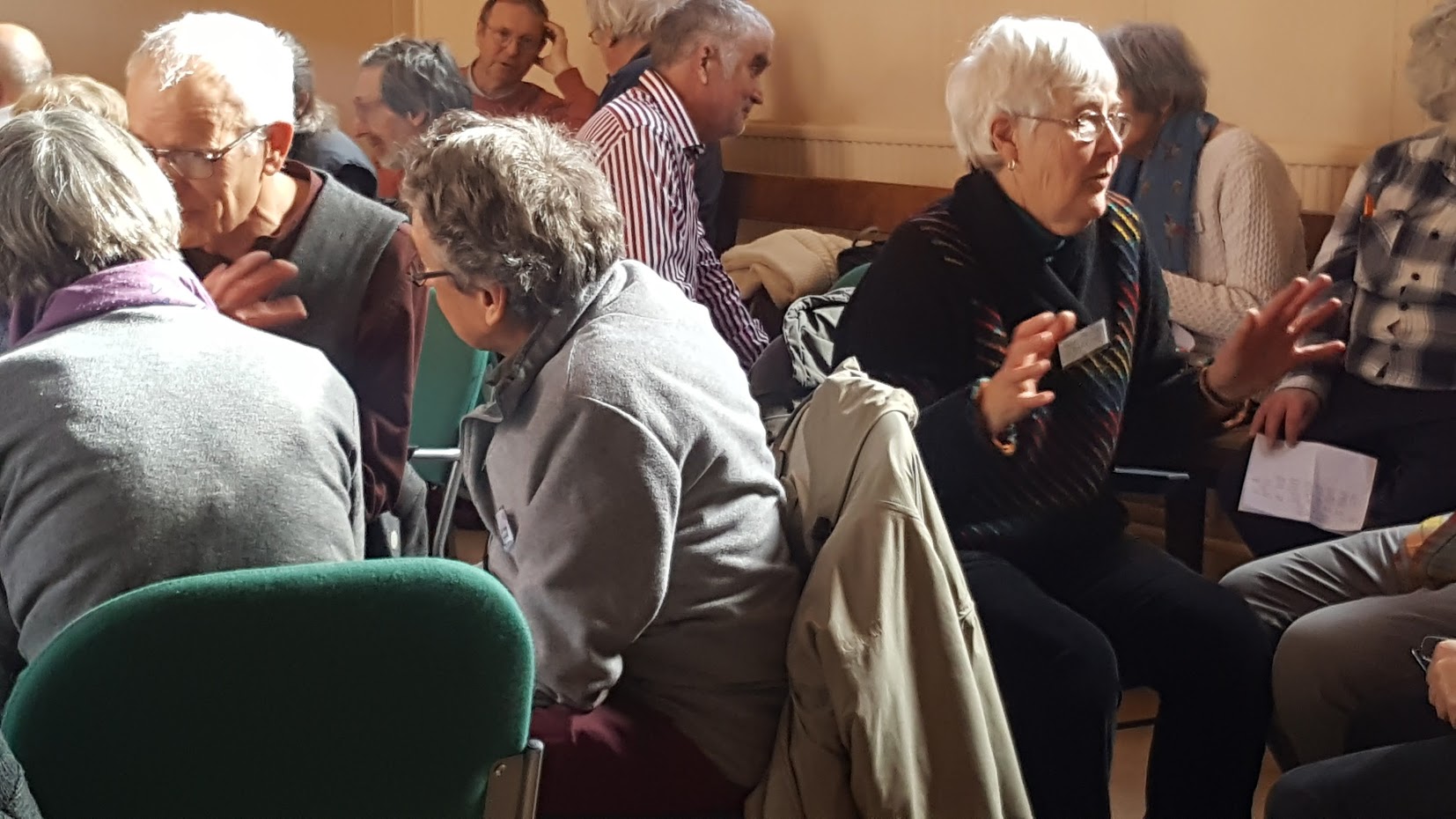 Friends from Notts and Derby Area Meeting provided hospitality for our first NFPB meeting of 2020. NFPB members were joined at Derby Meeting House by a good number Friends from the Area Meeting and further afield for the day and we were pleased to welcome new members of the Board.

In the morning session the first main item was an introductory presentation on the background and current and recent activities of Northern Friends Peace Board. The materials prepared for this are offered to members to share with their local and Area Meetings, so that our organisation can become better known and understood.

The first of a number of 75th anniversaries have already happened this year, with the liberation of Auschwitz having been marked by significant public and media events at the end of January. As we met, we anticipated the forthcoming public holiday marking ‘VE Day’. Friends were invited to reflect on how the war between 1939 and 1945 had influenced their understanding and commitment to issues of war and peace.

Responses ranged from a recognition that in the midst of the horrors of war, simple kindness – for example, that shown to evacuee children – was also present. We heard concerns that it can be too easy to oversimplify the message that ‘victors’ of the war were entirely on the side of good.

We were reminded of the number of wars in which Britain has been engaged since 1945 (see this list, for example), but also of the positive consequences of peace-making efforts, from the United Nations to smaller-scale initiatives, in preventing or bringing to an end violent conflict. Friends were invited to consider sharing their reflections in writing, to encourage further and wider reflection of these concerns.

Michael Mears, from Wandsworth Meeting, was welcomed to our meeting. As a professional actor, he has been involved in putting together performances that address social justice and peace concerns, most recently with ‘This Evil Thing’ having being performed widely to raise awareness of first world war conscientious objectors’ experiences and stories.

Michael, with You-Ri Yamanaka will be performing The Mistake from this summer. It addresses the build-up and consequences of the dropping of the first atomic bomb on Hiroshima, using this 75th anniversary year as an opening to raise these issues. We were privileged to have parts of the script performed for us, giving a flavour of the power that this drama will have in conveying the horrific reality of using such weapons. Why would a politician wish to ‘press the button’? Michael is seeking opportunities to take this widely to groups and venues, with performances being followed by a time for discussion of the issues raised.

As well as our usual agenda item for sharing news and updates on peace concerns and activities, the afternoon session of the meeting was focussed on addressing concerns brought to members by NFPB’s trustees. As with other parts of Quaker work, there are both challenges and opportunities ahead, from financial pressures to changes in the wider political and global context. The Board heard that trustees will be seeking additional sources of funding, so that we do not only have to draw on reserves to address operating shortfalls.

Working in small groups, Friends identified a number of areas that either need further consideration or might be leadings to ways forward. The value of working together as Friends, with times for mutual support and discernment, was affirmed. The climate crisis, economic inequalities and political tendencies that promote militarism all have an effect on peace concerns; how can NFPB, within the wider Quaker structures and the peace movement, best use its resources in the future? We were also challenged to be more inclusive. The consideration will continue and will be the focus of an additional meeting of Trustees and other Friends in May.