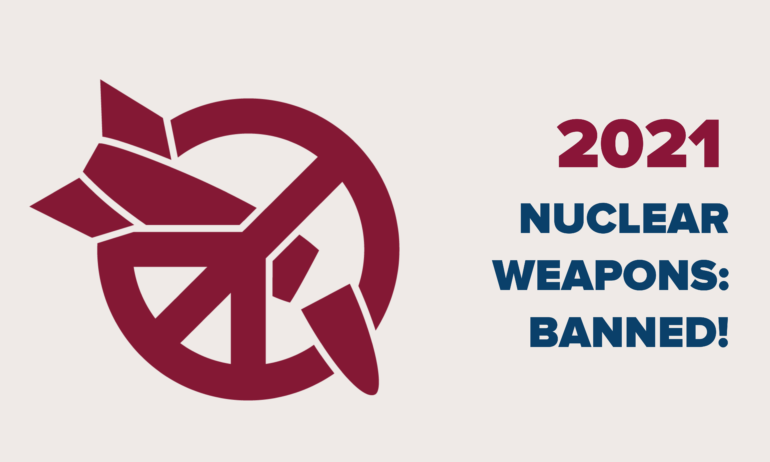 With other UK partners of the International Campaign to Abolish Nuclear Weapons, we have supported this letter to the Prime Minister, sent on 22 January as the UN Treaty on the Prohibition of Nuclear Weapons has come into legal force.

The Treaty on the Prohibition of Nuclear Weapons becomes binding international law today, following the ratification of the 50th state on 24 October 2020.

On behalf of UK-based partner organisations of the International Campaign to Abolish Nuclear Weapons (ICAN, the 2017 Nobel Peace Laureate), we welcome this important multilateral Treaty which will not only ban the production, testing, deployment, possession and use of nuclear weapons, but also prohibit those bound by it from assisting others in these illegal endeavours.

While we are disappointed that UK diplomats decided not to attend the negotiations that led to the Treaty, we note that the Treaty has the overwhelming endorsement of the UN General Assembly, where over two thirds of countries support it. We further note that the United Nations Secretary-General views the Treaty as an “important element of the nuclear disarmament and non-proliferation regime”.

Irrespective of the UK’s current position, the Treaty’s impact will be increasingly felt here in Britain. The Scottish Government publicly supports it and seeks to rid Scotland of Trident and end the dangerous transportation of warheads between Faslane, Coulport, and Berkshire’s bomb factories, Aldermaston and Burghfield.

Cities across Britain, including Manchester, Edinburgh, Oxford, Brighton and Hove, Norwich and Leeds, have signed up to support the Treaty’s implementation. Many more Councils will follow.

Nuclear weapons are dangerous security risks, not assets. They are useless for tackling today’s major threats like the COVID-19, climate and ecological emergencies. Whether intentional or accidental, nuclear weapons use would have catastrophic global humanitarian consequences – the UK therefore has a responsibility to work with the global community on this issue.

We urge the government to engage constructively with this Treaty, which will help create a more favourable environment for the Non-Proliferation Treaty review conference, rescheduled for 2021 due to Covid.

Until such time that Britain joins the Treaty, we call on the UK to participate in meetings of states parties as an observer and contribute to discussions including those on disarmament verification, environmental remediation and victim assistance.

1 thought on “Nuclear weapons treaty: open letter to the government”